Thinking About A Home Theater? Part 2 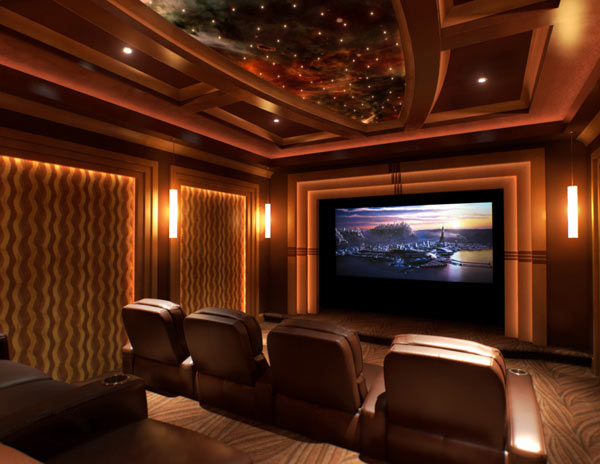 If you are thinking about remodeling a room or renovating to add space for a Home Theater, there are many things to consider, including choosing a remodeling company who knows what they are doing. We, at Cornerstone Builders, are a company who has extensive experience remodeling for Home Theaters and we like to keep our clients informed so they can make the best choices during the renovation. So here is Part 2 of our Home Theater series. In it, letâ€™s talk about the sound.

Speakers: The visual part of the theater is only half the experience; you need to great sound, too. We suggest five speakers and a subwoofer for your audio package. This setup is based on Dolby Digital 5.1 technology, which breaks down audio into six “channels,” each intended for a separate speaker: dialogue to one of three front speakers, ambient sounds to a pair of rear (or “surround”) speakers and low-frequency “end-of-the-world” booms to the subwoofer. Speakers sound better when they’re on stands or mounted on the wall, rather than set atop bookshelves or cabinets. The three front speakers should form a line with the TV, parallel to the seating area. The two rear speakers should be positioned opposite each other on either side of the listeners, slightly above ear level. It matters less where the subwoofer is placed, but for the best rumbling effect, put it on the floor behind the seating area or against a wall.

Wattage: This indicates how loud a speaker can play without distortion (and you aren’t holding a rock concert in your home theater room, so you donâ€™t need as much wattage as you might think). Choose speakers that are closely matched to your receiver’s watts-per-channel rating so your speakers don’t blow out during that high volume chase scene.

Ohms: Stick with standard 8-ohm units. The lower the ohm rating, the more electricity needed to generate the same volume, which can cause the receiver to overheat.

Magnetic shielding: If you are going to be putting speakers anywhere within a few feet of a CRT television, put magnetic shielding around them so they don’t interfere with the picture. This isnâ€™t necessary for other types of TVs.

Receivers: The receiver decodes signals from the inputs (DVD player, satellite dish, cable television) and routes them to the proper outputs (television and speakers). Differences between models may be subtle so consider carefully when choosing for your renovation.

Surround-sound formats: Choose a device that is at a minimum Dolby Digital 5.1- compatible â€” that’s the current standard for most DVDs. But, as we said in Part 1, of your budget permits, think about getting Dolby Digital Surround EX or Digital Theater System ES. Instead of six channels of audio, these formats divvy up the signal into seven or eight channels (youâ€™ll need that many speakers too), which creates a true theater listening experience. Choosing a receiver that can process both formats is a wise choice when you are buying components for your remodeled home theater.

Amplifiers: Buy yours amps as stand-alone pre- and power amps. You can buy them bundled, but you can more easily fine-tune and upgrade individual speakers to create better sound (especially during high volume scenes).

Next time, we will talk about picking the visual components for your Home Theater remodeling project and help steer you to the best choices. Why not make the first right choice now and call us at Cornerstone Builders? We will come to your house and give you a free estimate on remodeling or renovating to give you the Home Theater of your dreams.

Thinking About A Home Theater? Part 1

Thinking About A Home Theater? Part 3